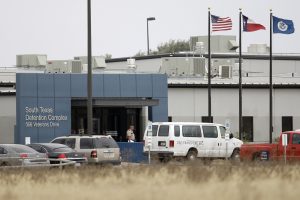 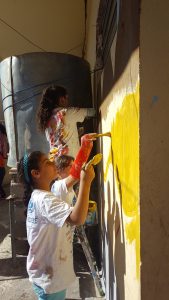 “Nobody Knows” was written by a 14-year-old Syrian refugee and is featured in the latest issue of the The London Reader, “Home: Stories of identity, belonging, loss, and migration”.

These stories, drawings, and photographs come from a small group of Syrian girls aged 11 to 16. The girls are living in Akré Refugee Camp, a former-Suddam Hussein intelligence centre, in Kurdistan, Northern Iraq. The refugees’ houses are former holding cells. The camp has a heavy presence. When the building was first opened, all you would have seen, in every direction, was the peeling, yellow walls and, hung large on the 2nd floor, the Kurdish flag. Standing in the centre of the camp, turning in a circle, you would have seen the same image, again and again. The bareness. The despair.

When the children arrived in the camp, this scene of desolation and misery is all they had left to call home. The children had fled the Syrian war, some on horseback, many on foot, across the desert. They had been lined up at checkpoints, counted, told where to avoid landmines, and sent to the camps. Many of the children had lost relatives, and some had seen bodies scattered in the streets. Here, at the camp, the horrors that these young children witnessed are not spoken of. They are dealt with silently, gently, and personally.

The children, however, transformed the camp, reclaimed the space, called it their own. Over the last two years, the children have covered nearly every available wall with their thoughts, their feelings, their anger, their misery, their longing for the past, and their hopes for the future.

You can see more of the girls’ artwork and stories alongside other writers and artists exploring the concept of Home in PDF through Patreon.com or on Kindle through Amazon.co.uk or Amazon.com.

“A glitch on Friday afternoon led Facebook to declare two million users, including Zuckerberg himself, prematurely dead. People logged in to their accounts to find that they had been ‘memorialized'” –The Guardian

Our lives and technology have intertwined with often uncanny fallout. In the Autumn issue of the London Reader, #cyberpunkNOW, a piece of minifiction by Benn Ward looks at the eerie cybershade that lives on in social media after a person’s death:

I HAD WORK in the morning, my first day back after the funeral, but I sat awake in the light of my computer screen, clicking through Dad’s Facebook page.

Condolences and prayers were still popping up on his wall—“You were the best coach I could have asked for. Thank you,” and, “Steve and I will always remember you. Love, Cherryl”—as if they were writing to his smiling profile picture taken at the top of Mount Rundle.

All of his Likes were in the present tense too. Curling. Hiking. He hadn’t played cribbage in years, but it was listed there. His most recent photo was from a friend’s retirement party in February at the Westwood Lodge, when he could still walk.

His last status was just beneath the condolences, asking if anyone had a spare 20 litre pot they could lend our family for Easter Dinner. He had trouble chewing solid foods, and Mom was going to make a soup.

These photographs, these words, this contrail of his life, is all that’s left. But none of the pictures showed him in his hospital bed, unspeaking, shaking, as he grasped my hand.

To read more of the #cyberpunkNOW issue, including another piece of minifiction in the “Facebook Family Furnishings” series by Benn Ward, subscribe or donate to the London Reader. 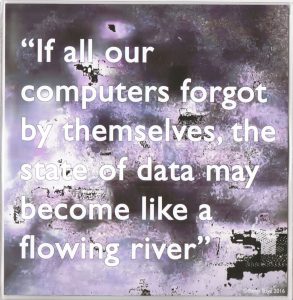 “In the project ‘3 Years and 6 Months of Digital Decay’ developed in association with the Arebyte gallery, I set up an online platform where a digital video will be more and more fragmented as time passes until the image disappears entirely three and half years after the launch of the website. Vicktor Mayer-Schonberger has talked about how digital media remembers so much information that we know less than the digital remembers. Because digital media can identically duplicate memories (unlike analogue), digital memories are immortal to begin with. If this immortal memory reaches every aspect of our lives (like search engines that can track every click we make online), the information may become beyond our control. Through my artwork, I want us to observe and think about how technologies of forgetting (or auto-decay) can be implemented in our lives and consider whether this technology is desirable for us.”

Shinji Toya’s artwork is featured in the latest issue of the London Reader, #cyberpunkNOW

“3 Years and 6 Months of Digital Decay” is a digital art project that Toya exhibited at the Internet Yami-Ichi event at the Tate Modern in London in association with Arebyte Gallery.

Toya is a multimedia artist originally from Japan, now based in London. He has been awarded the Contagious Nova Award in Lowe and Partner’s Nova Award Series. Toya’s practice is predominantly digital, and involves a range of diverse creative approaches such as moving-image, print, painting, computer programming, digital installation, and website. You can find him online at cargocollective.com/stoya

Current Issue: Our Time in Quarantine